Thanks to the constant and passionate search for all the opportunities offered to enhance visual communication, the capabilities we implement in every project allow us to offer a competent and careful listening to the needs of customers and provide an effective synergy of all the necessary skills to manage each step of the creative process of video production; in this way we can deal with any type of content , meeting the multiple needs of communication all over of the world. 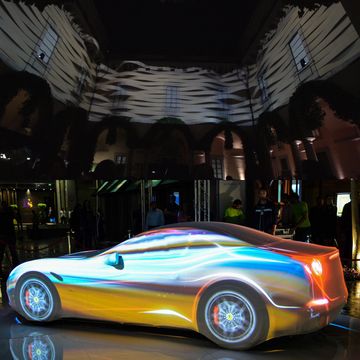 What is video mapping

"The real voyage of discovery consists not in seeking new landscapes, but in having new eyes"
Marcel Proust

"Every creation is, at its root, the struggle between potential form and imitated form"
André Malraux

Doing Video Mapping means extracting from an architecture a story that is inside it in its potential form, but which can't be enacted without the ability to see a dynamic narration of emotional suggestions in its static elements. The light that hits the surfaces creates an overlapping of realities that, thanks to perceptive ambiguity, gives the impression of being inside a simultaneously shape-altering, shape-denying and shape-affirming dimension. The space welcomes a new visual evolution and, with it, the resulting emotional flow.

Transforming the facades of city palaces with light is a new answer to an old need: that of telling highly collectively involving stories. The support is always the same: the palace. The technique changes: from ancient Mesopotamia, with its colorful bas-relief stories, to Trajan's Column, first step towards the movie art of the change of scene; from religious-subject narrations of medieval churches (an example is Notre Dame in Paris), to Renaissance texturing (Palazzo dei Diamanti - Ferrara), each era has used its palaces as a support for an artistic expression that tells about and celebrates its own culture.
Nowadays we paint, sculpt and build on surfaces using light. The tools, symbolic references, descriptive registers and narrative rhythms have changed, but we still celebrate social events in urban spaces, with the most universal and powerful language: the visual language.